Clark Bar and his sister Lois came into our lives at nine weeks old, when her eyes were blue and his were bright green. They were tiny cats, like their Siamese mother. My wife and I could hold each of them in the palm of one hand. The first time a vet saw Clark Bar, she commented, “It’s going to take you a while to grow into that nose!”

We named them after The Amazing Adventures of Superman, only we weren’t sure he would ever have the gravitas to be a cat of steel. (He was a sweet, nutty little thing from the beginning.)

Lois died quietly of a heart condition in September 2014. We found her on our bed, with Clark Bar sitting next to her and grooming her body. He clearly knew she had died, but in his little feline brain, “died” didn’t mean “gon 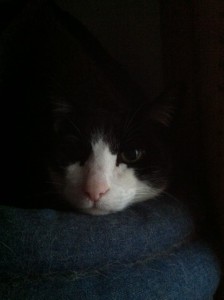 e away forever.” For months afterwards, he would go looking for her and calling for her in his high Siamese voice.

In May 2015, we thought Clark Bar was going to leave us too. He stopped eating and drinking, he grew weaker and weaker, and he sat in a sunny patch near the door and didn’t move. We will always be grateful that Dr. Rebecca Schoenberg came to our house and gave him a painkiller and an appetite stimulant. Clark Bar began eating again in an hour. Dr. Schoenberg realized that he had an undiagnosed kidney infection and put him on antibiotics. Within days, he was back to his old self! Not his younger self—he was already 18 at the time—but the talkative and affectionate old cat he had been.

The kidneys finally failed Clark Bar completely at the end of July, and in early August, once again, Dr. Schoenberg came to the house. She sedated him, and we saw his characteristic smile spread across his face before she gave him the injection that put him to sleep for good. It was the best possible way for him to leave this world. None of us knows, but we all imagine Clark Bar and Lois reunited, two black-and-white cats curled up like yin and yang.