It has been a while since I wrote my first memorial for Autumn Care &amp; Crossings. In 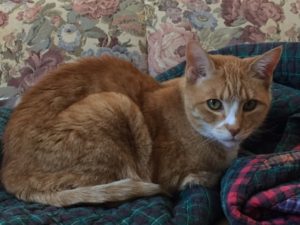 March of 2015, we became one of Dr. Schoenberg’s first clients, needing her
assistance to help our 15-year- old cat, Fog, cross the rainbow bridge. She was one of
a pair—sisters from a litter of feral kittens born in March of 2000. After Fog died, I
memorialized her for this site, and in that post I wrote:

We think Peach still has a few years with us, so we’re going to save Fog’s ashes
and when Peach’s time comes, we’ll ask Dr. Schoenberg to help her pass as well,
and then we’ll mingle the ashes of the two sisters. We’ll place them in the
garden to nourish a special planting. The girls will, in the end, be together
again.

As it turns out, Peach had another two and a half years with us, for which we are so
grateful. Dr. Schoenberg’s care and guidance during those years made such a
difference, and when Peach’s time to leave us came in August of 2017, we knew the
drill. We knew exactly how hard it would be, and also how easy it would be. In-home
euthanasia, as we had discovered with Fog, is the compassionate end-of- life passage
that we humans deny ourselves but gift to our pets. 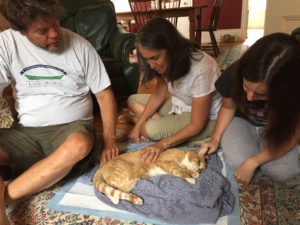 After Fog’s death, Peach became an entirely different cat. Yes, for about six months
she mourned her sister’s death, meowing plaintively as she searched for her in the
house or awaited her at the bottom of the stairs. It ripped our hearts out. But
eventually she…forgot. She adapted to life as a single cat, and to our tremendous
surprise, she blossomed. After 15 years of almost exclusively feline companionship,
she became more of a “people cat.” Always the beta, she’d spent a lifetime deferring
to her sister when it came to food and affection. She was skittish, and often hid when
people came over, leaving them to joke about whether we really had a second cat
because only Fog had the courage to show herself and cozy up to strangers.

It was astonishing the way Peach suddenly came out of the shadows, literally and
metaphorically. She began snuggling up with anyone and everyone. When clients
came to the house, she would not leave them alone, jonesing for caresses from
anyone who would have her. It was as if she were making up for all of the years that
Fog got the lion’s share of attention. We were grateful that in her golden years, she
not only survived the loss of her sister, but she thrived.
I’ll never forget the day I took my then-eight- year-old daughter Charlotte to pick up
the kittens from their foster home. The gray tabby that we later named Fog was
quite ready to go. The orange tabby, not so much. While Fog liked being held and
handled, Peach did not. We were told she’d need “extra work” to become more
friendly with people. The truth is that it never really happened, until the very end.

As a kitten, Peach was much smarter than her sister. She was aloof, but so much
more curious and active. A mouse could walk by Fog’s nose and she’d yawn, but
Peach? She was on it! Little escaped her notice. She even had an uncanny ability to
recognize cat species when she saw them on television. While Fog dozed obliviously,
Peach trained her gaze on the screen anytime there was a pet cat…or lion, tiger,
leopard, or other big cat performing in a commercial or being filmed in the wild.
Jackson Galaxy mesmerized her. She just knew!
Peach lived to be 17 and a half. It’s hard to remember what life was like before we
had the two cats. My daughter is now 25 and independent. I was divorced and
remarried, and we’ve moved twice. It’s the end of an era for sure. I blinked my eyes
and the kittens and my little girl grew up. March of 2000 feels like a lifetime ago, and
like it was yesterday.

Now we are catless. Over the past 20 years, I’ve had two dogs, two cats, many fish,
and even one pet snake. My husband Geof has had many of his own pets as well.
Now we don’t even have a houseplant. We’re going to see how it goes. If we don’t get
another pet, we may never see Dr. Schoenberg again, but we will always remember
and be grateful for what she did for us, and for our kitties.

We love you, Peach. And we love you, Fog. Soon we will mingle your ashes under a
new azalea bush in the back yard, and you will be together again. That was always
the plan. In that way, you will always be with us. 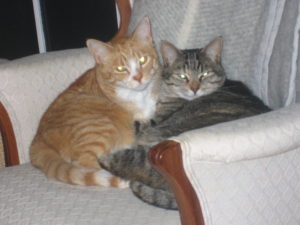